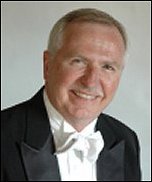 Over the Mountain Festivals welcomed Dr. Timothy Paul Banks as our Guest Clinician for our fourth season in 2011-12.

Dr. Banks is retired from Samford University in Birmingham after a thirty-four year career as music professor, conductor and composer. He received the B.M. degree in Music Education and Voice from Samford; the M.M. and the D.M.A. degrees in conducting from the University of Colorado-Boulder, where he was a student of Lynn Whitten (choral conducting and literature), Walter Collins (choral bibliography) and Giora Bernstein (orchestral conducting). Additional study includes work at Yale University (on the manuscripts of Charles Ives) and a conducting internship with the Atlanta Symphony Orchestra and Chorus. He has served as the Director of Choruses for the Alabama Symphony Orchestra and has conducted choral, orchestral and music theatre performances with many regional organizations. His international study and concert performance credits include work in England, France, Belgium, Germany, Spain and the People's Republic of China. Dr. Banks has served as Professor-in-Residence for the Samford London Study Program, a cross-curricular program based at Samford’s Daniel House in London.

Dr. Banks is a past Alabama state president of the American Choral Directors Association. His articles on choral music have been included in various ACDA publications in the past years, including his index of choral-related articles in the Journal of the American Musicological Society as a part of the ACDA Monograph series. He has presented numerous conducting pedagogy sessions for choral and instrumental education organizations, and is the author of the textbook, A Conductor’s Lexicon: Resources for Basic Conducting Study. (Highlands House, 2005.)