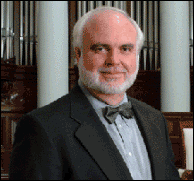 Over the Mountain Festivals thanks Birmingham's own K. Lee Scott for his excellent leadership in our second festival season, 2009-10.

During the past two decades, Lee Scott (born 1950) has emerged as one of America's foremost composers of music for the church. His hymns are found in eight hymnals including A New Hymnal for Colleges and Schools (Yale University Press), Voices United (The United Church of Canada) and With One Voice (Evangelical Lutheran Church in America).

His 300 published compositions include anthems, hymns, works for solo voice, organ, brass, and major works including a Christmas cantata, Te Deum and Requiem. In 1995, he was commissioned jointly by The Hymn Society in the United States and Canada, Inc. and choristers Guild to compose a hymn setting for their convocation in San Diego.